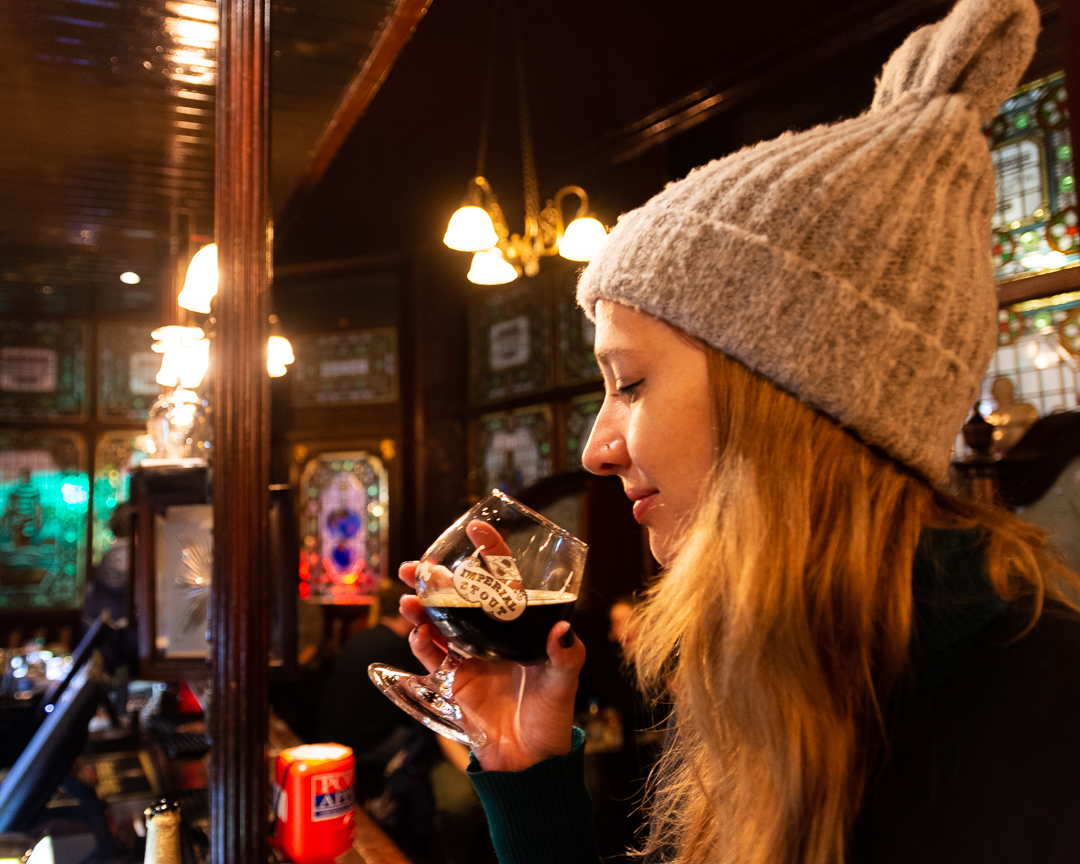 While there may not be a shortage of trendy new places to drink at in London, there’s something to be said for a good ol’ fashioned pub. Samuel Smith’s is a chain of pubs all over the U.K. (with dozens in London alone) that offers just that: a hearty pint, often drunk by the fire in an old Victorian building.

Pub culture is huge in the U.K. and it’s one of Gaurav and my favourite parts of living in London. We never grow tired of finding old pubs where we can while away an afternoon with beer and good conversation. Samuel Smith’s pubs are some of the ones we love the most – not least because of the no phones/laptops/electronics ban inside AND the fact that they only serve beers from the Samuel Smith’s brewery! So come along on a pub crawl with us of these 6 amazing Samuel Smith’s pubs you should be sure to check out when in London:

Your first stop on your Sam Smith’s pub crawl is the Lyceum Tavern! Located just across Waterloo Bridge, this fantastic little pub is centrally located and the perfect stopping off point once you’ve hit one of the many cool brunch spots nearby. What’s so great about the Lyceum Tavern? Well, it has your standard, reasonably priced variety of Samuel Smith’s beers, beautiful wood panelling inside, and cute little nooks for getting cozy on a winter’s eve. 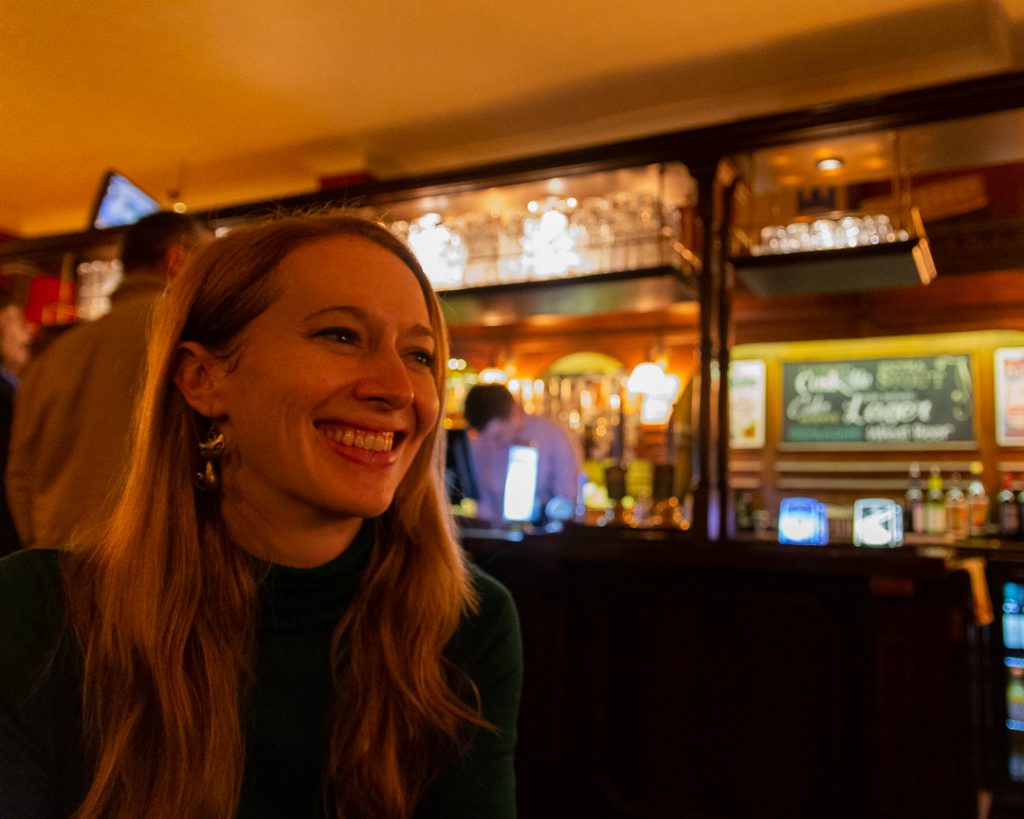 The Chandos is one of the liveliest Samuel Smith’s pubs in the area – mostly due to its proximity to Trafalgar Square and the National Gallery. Featuring multiple floors for drinking and eating (with a bar on each level), beautiful coloured glass windows, and lots of cozy seats, this is a favourite among tourists and locals alike. Be aware that the pub gets quite crowded after 1pm on the weekends, so if you’re looking for a quieter experience, try popping in before then!

A 10 minute walk further into Convent Garden will bring you to The Angel, one of the busiest pubs in the area due to its spectacular location. The Angel has a couple unique features you’ll notice in some Samuel Smith’s pubs: the first are the signs and beer coasters everywhere warning patrons against getting out their phones and other electronics. That’s right, this pub is an electronics free zone! The second is the multiple entrances that will lead you to separate parts of the pub. Supposedly, this is a throwback to a time when men and women were segregated from one another because it wasn’t proper to drink together (though it’s hard to imagine it being proper for women to be in a pub at all back in the old days). These days it’s just a fun quirk that makes deciding where you’re going to sit a bit of an adventure! 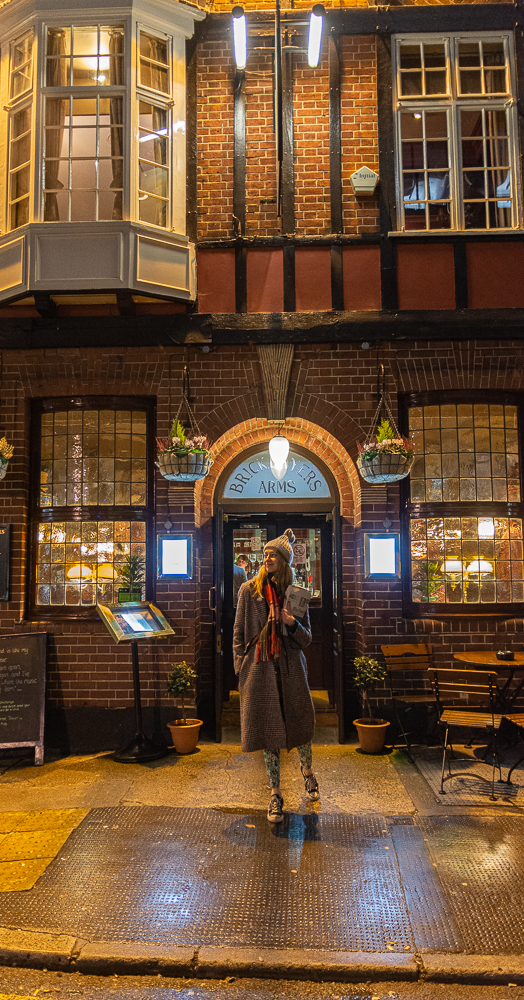 The Bricklayers Arms is a bit of an odd pub. On the outside it looks like your standard old Samuel Smith’s pub, and indeed when you enter the ground floor this perception holds. However, if you head upstairs to the second floor you’ll find a newer set-up complete with minimalist sofas around a shiny modern fireplace. This doesn’t take away from the charm though;  this is one pub that enforces the ‘No electronics’ rule and, due to its out of the way location on a quiet back street, tends to be a very chill place to hang out.

The Fitzroy Tavern is one of those rare beasts that tends to get busier during the week than on weekends. This makes it the perfect watering hole for a Saturday or Sunday afternoon Samuel Smith’s pub crawl. The main level is just the sort of dark wood panelled, slightly scuffed pub spot that makes you think of drunk poets, writers, and musicians hanging out in dim corners. In fact, it’s rumoured that George Orwell used to drink here, so the Fitzroy has a bit of celebrity sheen to it! 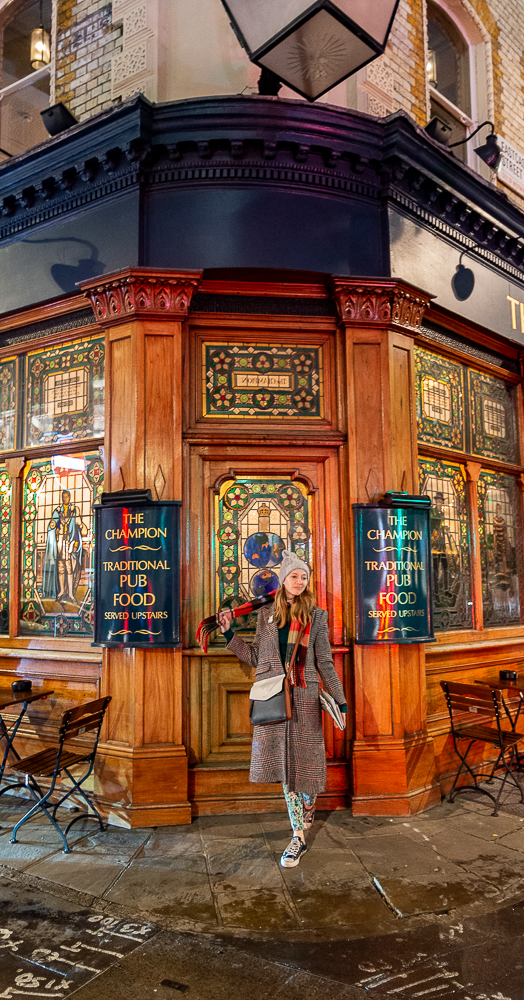 You won’t have to go far to hit your final stop (which is probably a good thing if you’ve had a pint at all the previous Samuel Smith’s pubs) – a 5 minute walk will bring you to the beautiful stained glass doors and windows of the Champion. This is one of those Sam Smith’s pubs with multiple entrances. Door Number One (on the left) will bring you to the section of the pub dedicated to cricketer WC Grace, while Door Number Two offers you entry into a part of the pub where Florence Nightingale is the focus! Choose wisely, as your decision will define you…just kidding, if you’re like us you’ll want to try drinking in both sides!

Are you up for a Samuel Smith pub crawl in London? Tell us in the comments section which pub you’d like to visit!

This site uses Akismet to reduce spam. Learn how your comment data is processed.